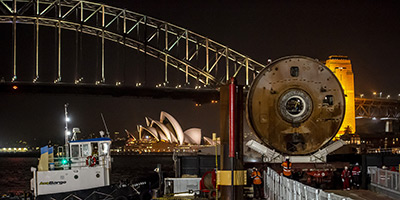 Sydney Metro is Australia’s biggest public transport project. The City & Southwest project aims to extend the Metro North West rail line from Chatswood through to the Sydney CBD and beyond to Sydenhamand Bankstown.
It is Australia’s first project to have five tunnel boring machines (TBMs) building tunnels simultaneously including under iconic Sydney Harbour and through the congested underground CBD environment, while roadheaders created some of the largest caverns in Australia.
Many achievements were implemented for this massive projects such as : 2 dives and permanent portal structures, 3 underground mined stations, 1 crossover cavern, 3 open station boxes, 3 shafts and 1 tanked station box structure. Impressive works were also operated with the excavation of 2 twin 15.5km fully lined tunnels between Chatswood and Marrickville with 57 cross passages. 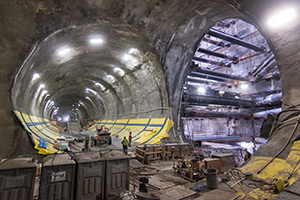 Chinatown Station is one of three stations for the Central Subway Project, a north-south LRT extension. Chinatown is a vibrant commercial and residential district with the city’s highest population density. Chinatown station project was one of the most challenging engineering and underground construction projects in the U.S. due to its setting in narrow streets, historic buildings, numerous utilities and poor ground conditions.

The station's main elements are the Station Platform and Crossover caverns combined. The overall main cavern dimensions are 192m long by 16.7m wide and 13.1m high with an excavated cross section of 202m2, making it one of the largest Conventional Tunneling excavation in poor ground and soil-like materials in the U.S. The main station entrance and service facility are located off street and connected to the platform cavern via a Cross-Cut cavern. This enables the construction of the station cavern in two directions simultaneously, running as many as four operations.

Due to ground variability and the risk of Conventional Tunneling, a pre-support system comprised of grouted steel pipe arch canopies were provided and face bolts were used in the center drift. To protect adjoining buildings, including “the Mandarin Tower” and the historic Presbyterian Church, an instrumentation and monitoring plan was developed using multi-point extensometers, inclinometers, and Total Stationing. Compensation grouting was implemented to maintain the settlement in impacted structures to less than 12mm. 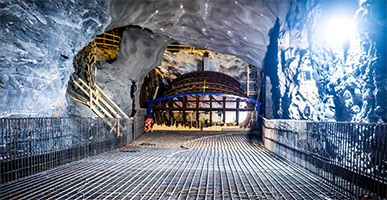 Nedre Otta Hydropower Project (Lower Otta HPP) is situated on the Otta river, one of the tributariesto Lågen river that further connects to Glomma, which is the longest river in Norway. The scope of works is the construction of an intake structure with a 200 m2 trash rack area and two intake gates, 10.1 km unlined headrace and tailrace tunnel (90 m2), surge tunnels upstream and downstream, Powerhouse 65,000 m3 with15,000 m3 concrete works.

The project consists of 11km of tunnels with a cross section up to 90 m2 (waterway), an underground powerhouse of 65,000 m3 with 2 Kaplan units (90 m3/s each)The project was split into multiple construction and supply contracts and coordinated by the Management and Supervision Team from Hafslund-ECO with support of Norconsult AS as the Owners Designer and Technical Advisor.

The project was based on a Virtual Design and Construction (VDC) process where a “digital twin” was established with input from all disciplines and suppliers. The construction was performed directly based on the BIM without production of 2D drawing. The underground works (tunnel and caverns) were preformed in a very efficent manner. Skanska utilized two Atlas Copco XE3 jumbos with 3 booms for the tunnelling works, drilling 5.2 m rounds to 2/8 full cross section. The loading was done with a 51
ton Cat 988. Transportation of the tunnel muck was performed with Cat 772 trucks with a maximum payload of 51.6 tons. At the maximum they had 6 trucks in operation at the site. In practice, there was one set of dump trucks that served both tunnel fronts. They achieved (slightly better than planned) average production rates 55 m/week with production of up to 68 m/week in some weeks for the headrace and tailrace tunnels with cross section of 90m2. 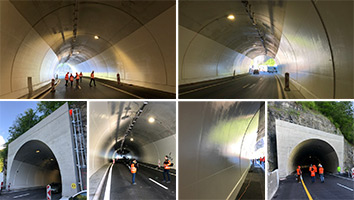 To secure the availability and usability of the motorway network, the Federal Roads Office (FEDRO) developed new solutions for the renovation of road tunnels while keeping them open to traffic, and initiated an innovative project. Completely replacing the primary lining could not be regarded as a standard solution because the secondary lining could not guarantee stability and the demolition work could endanger road users. The solution that was ultimately considered was to partially remove the primary lining,install drainage and sealing systems and then construct a new final lining.

The stability of the weakened arch could be secured using temporary rock bolts, and traffic diversions would only take place at night when work was being carried out in the tunnel.

The new arch of self-compacting concrete in tunnel T3 was constructed in a single step and is designed solely to provide the necessary stability. To maintain two-lane traffic during the day, aspecial tunnel formwork had to be conceived. For this project, two sealing systems were tested and compared: conventional synthetic sealing membranes and a sprayed sealing system.

Technical Innovation of the year 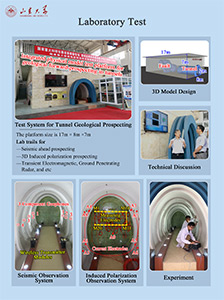 An increasing number of hard-rock Tunnel Boring Machines (TBMs) have been utilized for tunneling in the fields of transportation, water conservancy, and mining, etc. However, hard-rock TBM has poor adaptability of adverse geology, such as faults, karst caves and fractured zones. Without identification of unknown geology in advance, TBM tunneling may suffer geo-hazards like water in rush, collapse and large deformation.

For adverse geology like faults, this system was developed as an active-source seismic prospecting system mounted on TBM coupled with a real-time forward-prospecting technique using TBM drilling noise to realize accurate 3D imaging of faults and fractured zones within 120 m ahead, which also fills the international gap of real-time detection while tunneling.

Specifically, the detection system of the proposed IP and seismic methods are all mounted on TBM. Through remote control, automatic data acquisition can be realized within 10 minutes and construction activities of TBM will not be influenced. This prospecting technique has been applied in21 engineering projects for 1365 times (67.42 km in total) without missing any major disaster sources, which played an important role in TBM tunneling efficiency optimization and safety assurance. 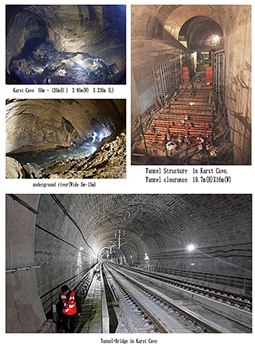 The project takes place in a section of Yujingshan Mountain Tunnel that encounters a giant 1.08 million m karst cave hall and 18km long underground river (on the Chengdu-Guiyang High-speed Railway Line). The major part of the project was the construction of a tunnel crossing a giant karst cave and underground river.

With a designed speed of 250km/h and a length of 515km, the Chengdu-Guiyang High-speed Rail Project (CG HSR) is a key part of the “Lanzhou (Xining)-Guangzhou Corridor”, and one of the 16main high-speed railways (8 horizontal lines & 8 vertical lines) in China. With a height of 50m ~ 120m, the domed cave hall is located 60m below the ground. It is 95m inlength (in the rail line direction) and 230m in width. In terms of area, it is equivalent to three standard football pitches.

The project faces four major challenges as it crosses the giant cave and underground river system rarely seen anywhere else in the world :
- With the risk of cave wall collapse, the first challenge is to ensure the safety of construction personnel and equipment in the cave.
- With the overhanging rail line and the unstable deposition at the bottom of the cave, the second challenge is to determine what kind of engineering structure should be adopted to cross the cave hall safely and economically.
- With a high and giant karst cave and limited working faces for tunnel construction, the third challenge is to complete the project on time.
- With the need of protecting environment and drinking water resources from polluting, the fourth challenge is to maintain the balance of the existing underground water network and the original ecosystem.

Several solutions were set up : design and construction methods to avoid project interruption/pause, large-volume karst cave backfill technology and the "tunnel + bridge" integrated structure, Construction technology innovation to ensure construction safety and meet the deadline and layered groundwater discharge system is designed: underground river is discharged through diversion channels; fissure water seeps from rock layer around the cave, and rainy-season floods are discharged from the spillway.

Oddities of the underground

Tunneling in the service of archaeology 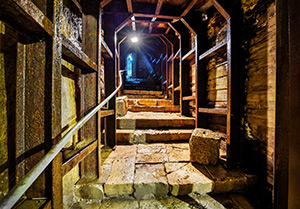 Hidden beneath the present-day historical center of Jerusalem lies a city built more than 3,000 years ago. Every year it attracts more than half a million visitors captivated by its history. The entire extent of the archaeological site has not
yet been fully explored as the excavation works reveal it. Excavations are already taking place for the last past years, revealing important and significant findings of the ancient Hordus-Passage leading to the ancient Temple.

Tunnel design and building expertise in soft grounds and archaeological fill is required in order toproceed with the excavations and make the site accessible to the public. Excavation is carried outunderground, manually, using steel ribs and steel plates as temporary and permanent support. The sensitive environment demands great dexterity and flexibility. Unexpected finds can lead tosudden changes in the direction of excavation, often accompanied by low overburden heights and difficult ground conditions. Due to site complexity derived from small excavation area and risks of shallow tunneling in urbanarea, special excavation technologies are executed, such as custom-made drill machines adapted tosmall spaces.In addition to that, special measures are to be taken in order to consider the archaeological findings and to protect them during excavation. Unlike conventional excavation in which the muck is being moved away, the nature of this project is to keep the muck for further research by scientists. 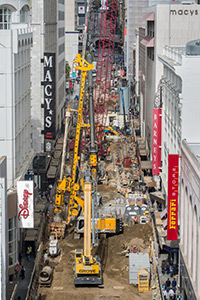 The Union Square Market Street Station (UMS) is an underground station that is being constructed as a part of the Central Subway Project in San Francisco, California. The entire project is a 1.7-mile-long subway extension with three underground stations and one surface station. The Project will improve public transportation by extending the Muni Metro T Third Line through South of Market District, Union Square and Chinatown. The south entrance will be integrated with the existing BART/MUNI Powell Street Station, providing a direct connection between the two transit lines. To the north, the main entrance will be at the south-east corner of Union Square on Geary Street.

A portion of the famous Union Square Garage and Plaza will be repurposed to house the main points of egress as well as two emergency ventilation shafts. The station is approximately 950 feet long. Its overall configuration is divided into three areas: the North Concourse, the Platform and the South Concourse. The North Concourse is about 200 feet long and 55 feet below the roadway. The Platform is approximately 400 feet long and ranges in depth from 90 feet to 100 feet. The South Concourse is about 250 feet long along Stockton Street and another 100 feet as it wraps along Ellis Street. The depth ranges from about 20 to 30 feet as it ascends north.

Young Tunneller of the year 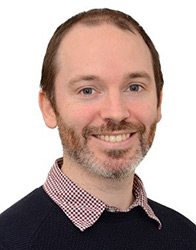 Josh started his career at Aurecon as a student engineer in Melbourne, Australia, in 2007. He had recently returned from an exchange in Canada at the University of Waterloo, where he was enthused by the area of geotechnical engineering.

This passion was furthered through a 12-week work experience placement at Aurecon, and it wasn’t long before that work experience led to a full-timerole. But it was a move to Hong Kong in 2011 where Josh really began to step up and take on challenges beyond his experience level, including the South Island Line, which really formed the base of his career and got him excited about developing his future in tunnelling.

In 2016, Josh moved to Bangkok where he has gone on to create and lead Aurecon’s first tunnel team in Thailand. Some of the major challenges that Josh has faced are related to spending his career in three very different locations (Melbourne, Hong Kong and Bangkok).